A History of the Lodge 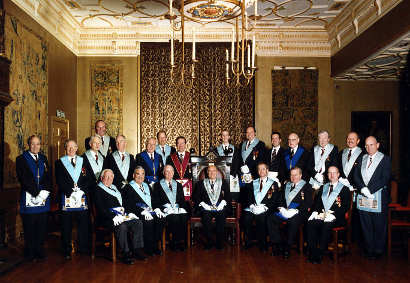 This Lodge owes the first plans for its formation to H.E. and C.W. Haig-Brown, the son of the famous Dr William Haig-Brown, the Headmaster whose drive and determination led to the move of the School from the City of London to Godalming in 1872. The Lodge was consecrated at the London Charterhouse on Friday 20th December 1901 by the Grand Secretary, V W Bro Sir Edward Letchworth, assisted by a retinue of distinguished Grand Officers. The first Master of the Lodge was W Bro Clarence Haig-Brown. The Lodge was called the "Deo Dante Dedi Lodge" after the motto of the School and of its Founder, Thomas Sutton, "Charterhouse" being added at a later date.

Charterhouse Chapel is England's largest war memorial
More info:
(and do you remember this Union Flag?)

From its Consecration in 1901 until 1941, the Lodge met at the London Charterhouse. The Hospital and Free School in Charterhouse were founded in 1611 by Thomas Sutton on the site of a former Carthusian monastery near Smithfield. Soldier and merchant venturer, Sutton spent his last years thinking chiefly about the disposition of his fortune which had come "upon him like a tyde by the just acts and methods which he used", of which one was privateering! Rejecting a suggestion that he should name the Duke of York (afterwards Charles I) as his heir in return for a barony, he decided upon the foundation of a hospital and a school, which he endowed through his will made only a few weeks before his death on 12th December 1611. Earlier that year he had purchased the site for his foundation from Thomas Howard, Earl of Suffolk, whose house the property had eventually become following the dissolution of the monastery in the reign of Henry VIII.

In 1941 large portions of the London Charterhouse were destroyed by enemy bombing and many of the Lodge treasures were lost. The Lodge then met at Freemasons' Hall and at other places until, in 1947, the Lodge settled at the Piccadilly Hotel, where the Lodge celebrated its Golden Jubilee on 30th January 1952.

Following the end of hostilities in 1945, the Governors of Charterhouse undertook the task of rebuilding those parts of the London Charterhouse that had been destroyed or badly damaged in the war, all under the guidance of Lord Mottistone and Mr Paul Paget. At an Emergency Meeting held on 17th April 1957, the Lodge returned home in the presence of most of the Masters of the Lodges forming the Public Schools Lodges Council, of which the Lodge was a founder member in 1909, the other founders being the Lodges associated with Westminster, Cheltenham, Sherborne and Clifton.

The Lodge has been able to count many distinguished Freemasons amongst its members since its foundation more than 100 years ago, but mention will be made here of just one, the late R W Bro Sir James Stubbs KCVO OSM PSGW who was Grand Secretary of the United Grand Lodge of England from 1958 to 1980. Sir James was very fond of his association with CDDD and he was an unfailing source of help and inspiration to the Brethren.